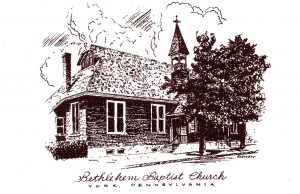 Under the leadership of the late Rev. Cornelius Odom of Bamberg, South Carolina, a group of Christians were called together in 1926, with the express purpose of establishing a church. With a nucleus of followers, a place of worship was located in a dilapidated and former closed poolroom in the one hundred block of West Princess Street. With an old coal heater, straw mats covering the floor, donated chairs and an organ donated by Rev. Odom, this group began to “make a joyful noise unto the Lord.”

For a year, the Rev. M. Berge was pastor of the mission which was named at that time, Mt. Zion Baptist Church. After the resignation of Rev. Berge, Rev. M. L. McKissic was called to pastor. Under his leadership the mission was reorganized, officers elected and the name was changed to Bethlehem
Baptist Church. In 1928, Central Baptist Association was petitioned for recognition as a church and full recognition and membership was granted.

In 1929, a new location was found – a church formerly used by Grace and Hope Mission at West Princess Street and Park Lane. In their new home, the membership grew and church auxiliaries were organized including the Missionary Society, the Women’s Auxiliary, and Sunday School.

In 1933, Rev. Daniel A. Scott accepted the call to pastor. He organized the Baptist Young People Union (BYPU).

Rev. Blackwell was followed by Rev. Carter who served for a short time.

The Rev. Haywood G. Knight assumed the pastorate in June 1969. Under his tenure the membership increased greatly, building renovations made and a mortgage liquidated.

In October 1979, Rev. Aaron Willford, Jr. was called to pastor and ordained as a Missionary Baptist Minister by the Central Baptist Association. Under his leadership the church has continued in its mission, purpose and growth. Many ministers have been ordained, new ministries have been added and many ministries reorganized. The church has acquired additional properties next to the building and improvements made to the existing building.

We give thanks to Almighty God for many years of being able to freely worship according to our religious beliefs and convictions, carrying out our purpose as “a church with a vision and a mission.” 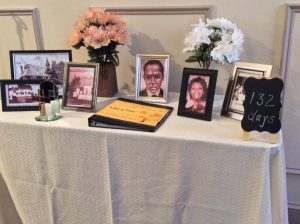